There are a number of “Voter’s Guides” circulating around the pro-family/pro-life movement that contain inaccurate information regarding Mitt Romney’s record on abortion.  These Voter’s Guides are based upon information submitted by the candidates, a notoriously inaccurate way to assess them.  A far more accurate way to determine whether a politician will vote correctly on pro-life issues is her or her actual record.  The two largest groups engaged in distributing inaccurate Voter’s Guide are the Family Research Council and the National Right to Life PAC.

This type of Voter’s Guide easily can be “gamed” by candidates seeking pro-life support; indeed, a candidate who owned abortion clinics could fill out a Voter’s Guide questionnaire “correctly” and thereby be portrayed as pro-life. The failure to create Voter’s Guides based on a candidate’s actual abortion record has led to the election of candidates who have not always voted pro-life.   Regarding Romney, there is a huge difference between his actual record and what he says on the campaign trail.

It is possible that a politician could change his views on abortion.  Thus, we have decided to judge Romney based only on his actions on abortion since his very public pro-life “conversion” in November, 2004.  Here is what we found:

2004 – 2007.  Romney invested in stem-cell research. Romney invested in Novo Nordisk and Millipore, two companies involved in stem-cell research. He also had investments in Warner Chilcott, the firm that produces Loestrin, an abortifacient.  (1)  Romney maintained investments in these companies for three years after his “conversion” but never bothered to instruct his trust manager to avoid investing in anti-life companies until after it became public knowledge. (2)

2005. Romney refused to advance the pro- life agenda while Governor, even after his “conversion.” Yes, the Massachusetts legislature was and is controlled by the Left, but regardless, Romney made little to no effort to fight for pro-life issues or even fight against pro-abortion causes. Indeed, shortly after his ”conversion,” Romney even boasted about “successfully” ignoring pro-life issues in a video clip now on You Tube:  “I am absolutely committed to my promise to maintaining the status quo with regards to laws relating to abortion and choice and so far I’ve been able to successfully do that….”(4) 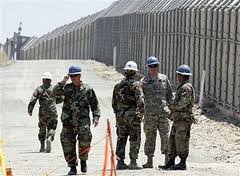 Those that are here paying taxes and not taking government benefits should begin a process towards application for citizeship….

I don’t think there should be a pathway to citizenship for people who are here illegally.

One of the top issues in the 2012 presidential campaign is illegal immigration and the candidate who has most taken advantage of this issue is Mitt Romney.  His campaign team has decided that this will be the main issue used to defeat Governor Rick Perry due mainly to Perry’s support for in-state tuition rates for illegal alien students.

Indeed, Romney’s numerous consultants and image makers created a myth during the 2008 GOP presidential campaign that Romney had a conservative record on this issue, and this myth making has continued through the current campaign.  What’s troubling is many of America’s leading conservative pundits and mainstream reporters accepted this mythology with no questions asked.  However, nearly all of Romney’s “hard-line” positions on immigration policy appear to be phony since only a few years earlier his positions were different. It is clear Romney’s positions have been either created solely for his presidential campaigns or were based upon events that simply never occurred.

Indeed, the immigration quotes Romney’s media team have released during both presidential campaigns appear as if they were written by pollsters after carefully testing the effect they would have upon the voters.  They certainly do not sound even remotely like the statements Governor Romney would have made just a few years earlier.

You’ve got to have a wall or fence or electronic surveillance. You have got to make sure we secure our border, that’s first. (4)

And he was very strong in the words he chose to oppose the amnesty legislation championed by his main primary opponent in the ’08 campaign, Senator John McCain:

’m against an amnesty and against anything that provides an incentive for people to come here   illegally. (5)

But the reality is that Romney’s record as governor was very different from the image his consultants have created for the 2008 and 2012 primaries.  Do we determine a man’s worldview by his actual record?  Or do we base our opinions of him upon statements made during a campaign?  It would be wise to choose the former and not the later.