Every since Mitt Romney first tossed his hat into the presidential sweepstakes in 2007, he has  repeatedly maintained that he opposes same-sex marriages and has always portrayed himself as a champion of traditional marriage. However, in an incident that has gone mostly unreported, Romney, as Governor of Massachusetts, personally issued at least 189 one-day special [...]

Is Mitt Romney The Father of Gay Marriage? Twenty-Four Reasons Why He Is

By Rino Hunter As Mitt Romney prepares for his second presidential campaign and gay marriage threatens to undermine America’s Judeo-Christian culture, there’s a raging debate about the role he played in instituting gay marriage in Massachusetts during his gubernatorial term. This is important because Governor Romney has positioned himself as a champion of traditional values [...]

By Rino Hunter Recently, various media outlets have reported on Romney’s statement in which he expressed support for global warming:  “I believe the world is getting warmer, and I believe that humans have contributed to that.”  This despite the last two winters being among the coldest in recent history and the recent evidence revealing pro-global [...]

The Open Letter that Started it All

An Open Letter about Mitt Romney

To:       Conservative, Catholic and Evangelical Leaders From: Read the List of Signers Here Date:   January 20, 2011 Subject:  America Needs Bold Conservative Leadership, not a Manufactured Candidate A few weeks ago Mark DeMoss circulated a letter urging conservative and evangelical leaders to get behind Mitt Romney’s presidential bid. We, the above listed individuals, have decided to respond with the argument that a Romney candidacy would be disastrous for the conservative movement and for the country. Romney’s Business Management Experience Does Not Guarantee He Will Govern As A Conservative One of the primary arguments presented by Mr. DeMoss is that Romney’s business management experience and his allegedly outstanding performance managing the state of Massachusetts thereby qualifies him to not only be president but to have the support of the conservative movement.  However, business experience does not guarantee  a person will govern as a conservative.  There have been many liberal presidents with business experience; one that comes readily to mind is Jimmy Carter, who managed a peanut farm business.  Indeed, the RINO population is full of businessmen and some of America’s leading businessmen supported the candidacy of Barack Obama. The goal of conservatives is to scale back government, not manage big government more … END_OF_DOCUMENT_TOKEN_TO_BE_REPLACED 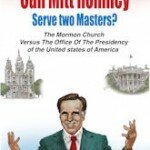 Book Review: “Can Mitt Romney Serve Two Masters? The Mormon Church Versus The Office Of The Presidency of the United States of America.” by Tricia Erickson

Tricia Erickson is the daughter of a Mormon Bishop and is thus far more familiar with the history and rituals of the Mormon faith than most. Currently, Erickson is a public relations professional and a political commentator. The book, as the author describes it, is “an in-depth exposé into the political, personal and [...] 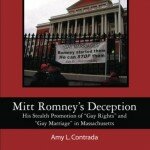